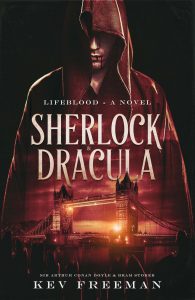 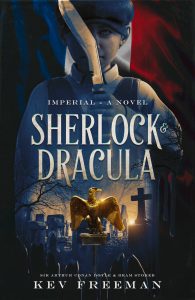 From THE VALLEY OF FEAR & THE ADVENTURES OF SHERLOCK HOLMES by Sir Arthur Conan Doyle & DRACULA, by Bram Stoker, read a story that is set to continue the hunt for Dracula by the world’s most famous detective, Sherlock Holmes.

Seven years after Dracula’s apparent demise at the hands of Jonathan Harker and his five compatriots in the forests of the Carpathian Mountains, Sherlock Holmes is asked by Mina Harker to help track down what she believes is the returning vampire before he takes his revenge. But she may be too late. Can Sherlock and Dr. Watson find the lair of Dracula located somewhere in Victorian London before vengeance is served?

“Seven years ago we all went through the flames; and the happiness of some of us since then is, we think, well worth the pain we endured. It is an added joy to Mina and to me that our boy’s birthday is the same day as that on which Quincey Morris died. His mother holds, I know, the secret belief that some of our brave friend’s spirit has passed into him. His bundle of names links all our little band of men together; but we call him Quincey.

In the summer of this year we made a journey to Transylvania, and went over the old ground which was, and is, to us so full of vivid and terrible memories. It was almost impossible to believe that the things which we had seen with our own eyes and heard with our own ears were living truths. Every trace of all that had been was blotted out. The castle stood as before, reared high above a waste of desolation.

When we got home we were talking of the old time, which we could all look back on without despair, for Godalming and Seward are both happily married. I took the papers from the safe where they had been ever since our return so long ago. We were struck with the fact, that in all the mass of material of which the record is composed, there is hardly one authentic document; nothing but a mass of typewriting, except the later note-books of Mina and Seward and myself, and Van Helsing’s memorandum. We could hardly ask any one, even did we wish to, to accept these as proofs of so wild a story.”

The adventure continues when Sherlock is called to a mystery in southwest London, which links to France and the Emperor Napoleon III.